Cousin Island Special Reserve has recorded a phenomenal eight-fold increase in abundance of nesting hawksbill turtles since the early 1970s based on new analysis of data, a scientific paper published in the Endangered Species Research journal has revealed. The increase is directly attributed to the ongoing turtle conservation program on Cousin started in 1972.

"These findings are a validation of the important work carried out on Cousin." Says Nirmal Shah Chief Executive of Nature Seychelles - BirdLife's partner in the Seychelles, which manages the island. "It is long awaited proof that conservation works even for long lived and critically endangered species like marine turtles."

The evidence shows that Cousin Island, an Important Bird Area (IBA) known for saving birds like the Seychelles warbler from the brink of extinction,  is also a sanctuary for other endangered species. "At 29 ha, it is one of the smaller islands within the granitic Seychelles yet one of the most important nesting grounds within this region." The paper says.

Turtle populations are notoriously difficult to census, relying upon long-term monitoring of females at their nesting beaches. This makes the monitoring on Cousin a mean feat.

Turtle monitoring commences each season when wardens observe the first evidence of a turtle emerging onto the beach to lay her nest. This generally occurs around late August, and turtles continue to emerge until late February or early March. Beaches are 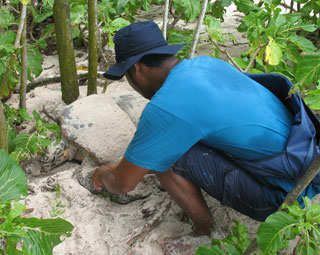 periodically patrolled. A complete patrol involves a full circuit of each of the 4 beaches on the island and varies in duration from 30 minutes to 3 hours, depending on the number of turtles and tracks encountered. Females emerging on Cousin are individually tagged, and nesting data collected from nesting attempts  observed through tracks  and actual turtle sightings.

"Survey effort varied over the years for a variety of reasons, but the underlying trends over time are considered robust." The authors say.

Tag returns also show inter-island nesting occurs between Cousin and other islands within the Seychelles.

The archipelago provides key nesting and feeding areas for the hawksbill. Seychelles accounts for breeding populations estimated to be in the thousands and is home to the largest remaining populations of hawksbill within the western Indian Ocean.

Hawskbill turtles have been protected by law since 1994 when a total legal ban on turtle harvest was implemented. But populations had already declined due to widespread harvesting of nesting females during the 30 years prior to that, with the exception of Cousin. Some poaching still occurs and there have been several arrests and legal cases.

A worldwide trade in turtle shells had also significantly depleted this species globally. In 1996 a total international ban on trade in this species was instituted. Problems of by-catch and habitat destruction still remain in some countries. In the same year the World Conservation Union listed hawksbill turtles as 'Critically Endangered'.