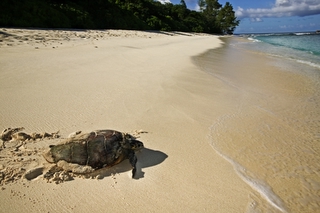 Few would have thought that technology is yet to catch up with the marine conservation. But Alas! Nature Seychelles is spearheading Seychellois youth in adopting emerging technologies for conservation....Read More

[ROCHE CAIMAN 8TH/09/08] In the beginning it just appeared to be any other press event with little pomposity and lacking the usual news angle. In other words it was a common everyday occurrence, whereby a blue chip multinational finance company donated some computers to an established environmental agency.
This was how it seemed to be but as the proceedings progressed, the reality began to sink and the magnitude of the event began to take a new shape and angle altogether.
It was no longer an obscure news item but real time news.
Financial giant Barclays Bank was donating some two high-end computers to the Wildlife Clubs of Seychelles (WCS). The donation of these two computers also coincided with the official launching of a ground breaking research ideal whose ramifications will be felt all across the globe. In simple parlance the event runs under the banner of ‘Turtle Monitoring Project’.
Three conservation entities namely, Nature Seychelles, Wildlife Clubs of Seychelles and the Marine Conservation Society of Seychelles (MCSS) are pioneering a massive Turtle Monitoring project. A press communiqué issued by Wildlife Clubs of Seychelles which has a youth membership of over 700 members notes:
“The objective of the project is to get club members involved in tracking sea turtles using the internet, collecting data to understand turtle movements, evaluate their life history, behavior and eventually their migratory patterns.”
According to Nirmal Shah, CEO of Nature Seychelles and one of the key lead agencies in the "Turtle Monitoring Project": "The two main intentions of the project are to inculcate into our young students the desire to learn about the importance of conserving turtles (which are currently listed by IUCN as endangered) and also develop useful skills in deploying technology in conservation and the understanding of biodiversity."
It was this realization that gave the entire event a new spin. Seychellois youth are now able to track turtles from the internet. The overtly extensive voyage of turtles across the world’s oceans is now accessible to the youth through satellite transmission technology or to sum it all in one word, telemetry.
This monitoring has been made possible with scientists attaching transmitters on the turtle shells (referred to as carapace) when the turtles are nesting. Through this transmitters, the turtles sends signals each time they surface to several satellite processing centers. This data is in turn interpreted using latitude and longitude coordinates which help in mapping their locations and movements at the same time.
Armed with the migration maps, pertinent day-to-day issues affecting turtles such as internesting, foraging patterns, nesting beaches and general exodus can be reviewed quite easily.
It is this technological wizardry with a noble aim to conserve turtles that Barclays’ donation is imparting on the youth. This is the reason the press briefing acquired a new dimension. As the briefing came to an end and visitors exchanged pleasantries, the evergreen Guyanese proverb “Turtle can't walk if he nah push he head outa he shell” Which means  “In life you cannot make any kind of progress if you do not make the first steps,” filtered through. The first steps have already been made, and the Seychelles youth are leading the pack of many other Small Island Developing States (SIDS) in turtle conservation and its integration with New Media technologies.
"The emerging generation of youngsters are technologically savvy, and for us in the conservation field to be on top of our game we need them as they are the future. Small Islands States like Seychelles must integrate and merge the youth with New Media Technologies if their fragile ecosystems are to survive." Shah asserts.[ENDS]