As World Turtle Day  http://blog.arkive.org/2011/05/world-turtle-day/ is celebrated around the world, Cousin Island Special Reserve  has released its latest  monitoring results for the 2010-2011 Hawksbill turtle (Eretmochelys imbricata)  nesting season which shows an increase in numbers of nesting turtles.

The number of hawksbill turtle emergences and nests recorded in 2010-2011 (respectively 2319 and 945) were the highest ever recorded. The total number of different hawksbill turtles sighted was 293 compared with just 23 in 1973 when 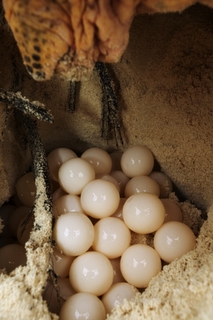 the turtle conservation program started. Previous estimated peak has been 256 turtles in one season.

Cousin Island Special Reserve manages what is thought to be the world’s longest  running  monitoring program on Hawksbill turtles.  The rookery there is considered to be the  single most important  site for hawksbill turtles in the  Western Indian Ocean.

Last year a paper published in the journal Endangered Species Research analyzed the trends since monitoring started in 1972 on the island and showed an amazing eight fold increase in turtle nesting  numbers. The data shows an increase at an average rate of 16.5 turtles per season between 1999 and 2009. See that story here.

The largest hawksbill turtle (Eretmochelys imbricata)  population remaining in the Western Indian Ocean is found in Seychelles, where about 1,230-1,740 females nested annually in the early 1980s.  Since then, however, populations have been reduced because of hunting of nesting females during the 30 years before 1994, when turtle harvest was completely banned.  The most spectacular exception to the decline is the population at Cousin Island Special Reserve. The trend shows that conservation of even long-lived endangered species is possible.