"Nature red in tooth and claw" is a saying attributed to the English poet, Tennyson. It describes the at times violent nature of animals. We don't have the bloody animal drama often depicted on National Geographic TV shows here in Seychelles. Not on land, at least. But we see our share of fighting and killing worthy of a mention. Here are a few from Cousin Island. 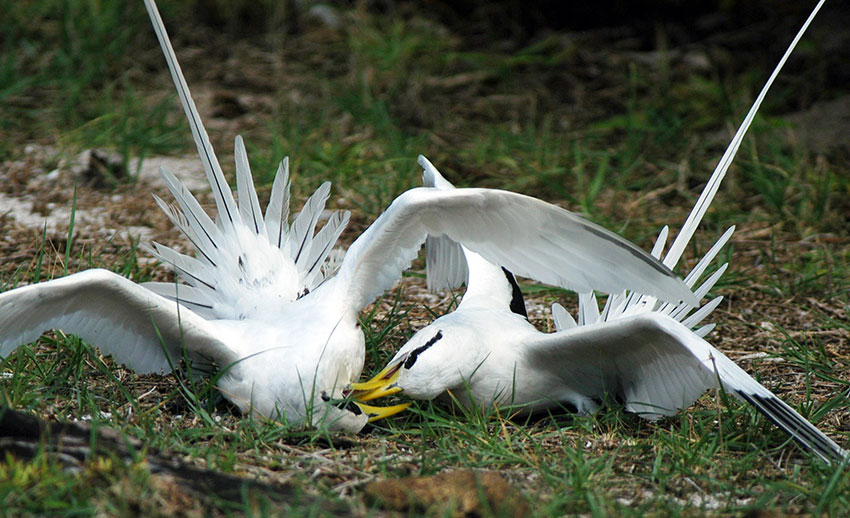 The White-tailed tropicbird is the number one fighter of the island. Competition over choice nesting spots causes most fights. These birds fight using their yellow beaks as vicious weapons, targeting vulnerable spots such as the eyes. It is common for fights to last for a length of time, becoming bloody before one of the birds concedes. They can end in blindness and even death. Staff will sometimes pick feuding birds up and toss them in the air to separate them. But often, once back on land, they get back into it. White-tailed tropicbirds also engage in fights with Wedge-tailed shearwaters when they attempt to nest in their burrows.

Seychelles magpie robins are similarly territorial and get into fights to protect the piece of real estate where they live and forage. A dominant male and female typically defend a territory. Challenging a dominant bird for territory can lead to aggressive conflicts, often resulting in injury or death. This is natural behaviour that defines the carrying capacity of the island for the species.

Do you know who else fights? Aldabra giant tortoises. Those lumbering giants don't look like they've got the energy to fight. But on Cousin, we've seen a pair who butt shells often, metaphorically speaking. They are said to be at odds over a romantic interest. Male Aldabra tortoises can fight with one another for breeding rights and territory. Staff had to turn one over after he landed on his back after a fight. Happily, not a single drop of blood was shed. 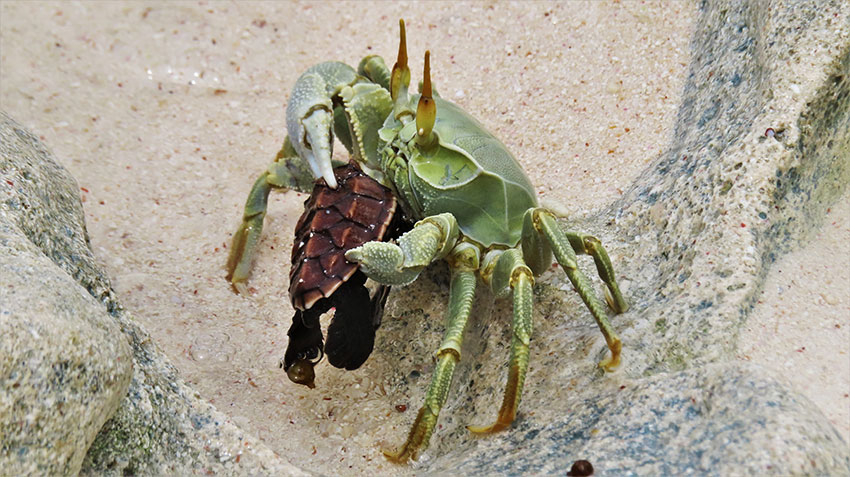 Bronze-eyed gecko fights result in the occasional swelling, which makes them look a bit alien-like. Some of the island's geckos have characteristic white scars on their faces and toes, the result of fighting. Tails are also lost and so are bits of skin, which the geckos shed as a defence mechanism.

Ghost crabs, the opportunistic scavengers of the island, spare nothing, big or small that they can eat. Their predation of Hawksbill turtle hatchlings and eggs is well documented, and equally heart-breaking. They chase after hatchlings as they race to the water, catching them in their claws and disappearing with them into their homes in the sand. Our turtle season team will sometimes try to chase them away, but oftentimes an unfortunate hatchling will end up as dinner. 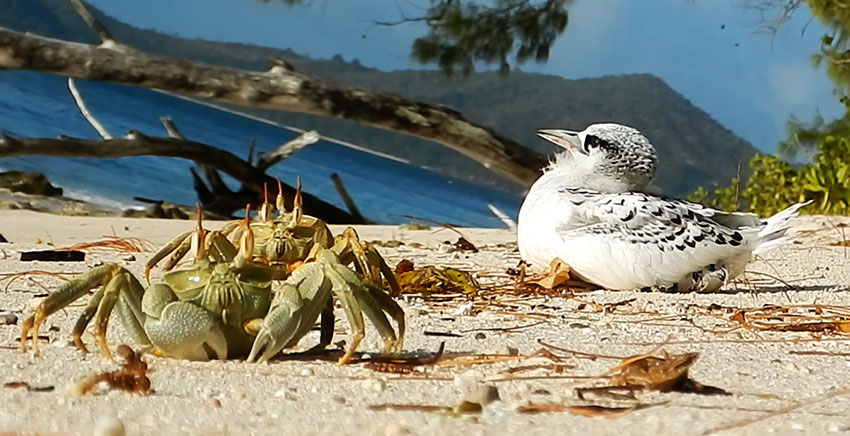 Grown chicks of the White-tailed tropicbird, which try to fly the coop prematurely and have the misfortune of being stranded on the beach will also attract Ghost crabs. You will see the crabs circling the chick, with their claws vibrating. And if the chick is not picked up and put in its nest, they will attack it. While this might seem sad to us, the ghost crabs are merely playing their scavenging role.