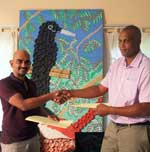 Nature Seychelles and the Seychelles National Park Authority (SNPA) have joined forces to work on a new project to help protect one of Seychelles iconic bird species – the Seychelles Paradise Flycatcher, Terpsiphone corvina, locally known as Vev. To formalise this partnership, a Memorandum of Agreement was signed on 19 October 2011 at the Nature Seychelles headquarters at Roche Caiman by the CEOs of the two organisations Dr. Nirmal Shah and Mr. Denis Matatiken.

Present at the signing were Mrs Barbara Barallon, the District Administrator for La Digue, and Mr. Flavien Joubert, Director General in the Department of Environment.

"Partnerships are crucial for conservation and have been used to save most of Seychelles endangered birds. The combined effort of conservation NGOs, government, businesses, and the community is probably the most powerful tool 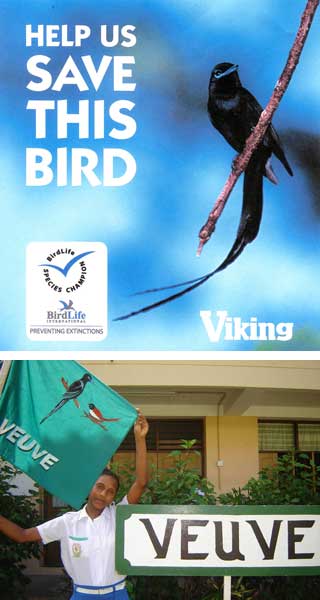 available  to us to address conservation issues in Seychelles," said Dr. Nirmal Shah.

"This is a good example of partnerships between government, NGOs and communities where all stakeholders are involved in conservation," said Mr. Matatiken. "Conservation is everyone's business and the little that we can all do contributes to the conservation of a species."

The project also has the approval of the La Digue Development Board, which is a very  important partner in saving the flycatcher and its habitats.

The project will see work carried out on La Digue with schools and local communities. It will build on the success of previous projects by helping to engage the local community in activities to protect the bird. Concentrating on the Veuve reserve, work will be done in schools and new ways to involve the local people and visitors in securing the future for the bird will be developed.

A previous collaboration which brought together the Durrell Institute of Conservation and Ecology, Nature Seychelles, the La Digue Development Board, Denis Island Development Limited, the Ministry of Environment and Natural Resources and the Royal Society for the Protection of Birds, resulted in the successful translocation of 23 birds to Denis Island to create "a safety net" population there. The translocation succeeded in establishing a second breeding population of flycatchers on Denis and marked a major milestone in the "Species Action Plan for the Flycatcher," aimed at removing it from the list of endangered species.

The new project will focus on further enhancing the population on La Digue. "This population is now threatened by habitat loss, invasive alien species and encroaching urbanisation. We hope to build on local support for its conservation," Shah says.

The project is part of the global Preventing Extinctions Programme led by BirdLife International (Nature Seychelles is BirdLife's partner in Seychelles) and is supported by Viking Optical, the species champion who help raise the vital funding needed to prevent extinctions.