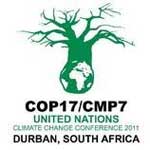 Last week the world’s deal makers gave up on the urgency to stop global temperatures rising more than 2 degrees Celsius.

The United Nations climate talks Durban, South Africa ended on Sunday with a so called roadmap which would agree on a treaty in 2015 and for implementation to  start in 2020. For many this was just another attempt to delay decisions on what must be the most urgent danger facing the world.

The main challenge of the Durban talks was to find a deal acceptable to develop and developing countries on the future of the Kyoto protocol which expires at the end of 2012.  In the end the developing countries, including the AOSIS grouping of Small Island Developing States (SIDS), agreed to establish the Durban Platform for Enhanced Action which would negotiate a new global agreement by 2015.

The Birdlife International Partnership (Nature Seychelles is Birdlife  in Seychelles) was not very optimistic. “Although a step in the right direction, the bottom line is that there remains a profound mismatch between the level of action demanded by our best scientific knowledge and the current level of ambition of the world’s governments…”, Melanie Heath, Birdlife’s Head of Policy, explained. “We are currently on a path towards 3°C to 5°C of climate change in this century, with likely disastrous consequences…”.

“Developing countries have been bullied and forced into accepting an agreement that could be a suicide pill for the world,” says  Ninmmo Bassey of Friends of the Earth International. The mood was further marred by Canada announcing that it would withdraw from the Kyoto protocol.

For Seychelles, other SIDS and neighboring countries of the Western Indian Ocean region, there are two important issues. One is the launch of the Green Climate Fund  which is intended to channel money to help developing countries, and secondly the discussion on ways and means to facilitate technology transfer, particularly in relation to the obstacles imposed by intellectual property rights.

But the only  clarity on the Fund was the agreement that it would be overseen by a body under the UN as requested  by developing countries, rather than the Global Environment Facility (GEF), which the European Union and United States wanted. “The deal has totally failed Africa," says Harjeet Singh,  of the leading NGO, ActionAid.  In fact, there is no money on the table for Africa and for SIDS to start acting on climate change. “The Green Climate Fund is like an empty shell" concludes Singh.

Even the African Development Bank is skeptical about the funding. The Bank has said that up to now Africa has benefitted from only 12 percent of global climate change funding, with most of it going to North Africa.

It was also agreed to  set up a  Climate Technology Centre and Network to facilitate technology transfer between developed and developing countries. Now the search is on for a host for the Centre. But the Durban Platform does not address Intellectual Property Rights or IPR. Many are saying that patent restrictions will be the major barrier to the free flow of appropriate climate-friendly technologies to the  developing countries that need them the most. At the end of the day the Centre  may become simply be used by big businesses in the developed world to  flog their technologies.