On Tuesday afternoon, 20 US Navy personnel from the USS Klakring took part in conservation activities at the Sanctuary at Roche Caiman, as part of community relations activities the ship undertakes while in port. Robin Hanson, the wetlands manager, coordinated the activities for the day, which were aimed at further enhancing the sanctuary's assets and developing a new community garden.

The sailors helped to prepare poles which will be used to build wildlife structures within the Sanctuary and to improve an activity area for vulnerable children groups. 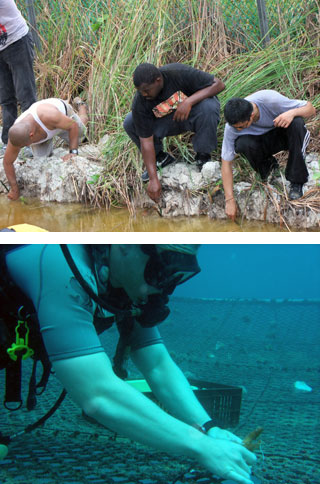 They also helped to carry bricks, red soil, compost and branches to the site for the construction of a new garden for the Greening Livelihoods Programme.

The sailors worked under the afternoon rain that fell on most of Victoria and lasted the two hours they were on site. Robin Hanson expressed his gratitude to them  for choosing to spend their afternoon in this way.

"I would like to thank you all for giving us your valuable free time. You've accomplished so much today, bringing many benefits to the wildlife and the community," he said.

To mark this visit and to leave a green footprint on the Sanctuary, the sailors planted  a species of mangroves at a site that is under development through the Mangroves for the Future Initiative.

"It's really an honour to come out today and serve and contribute to the community in Seychelles. It's probably the best way we could spend our time," said  Lt. Trey Souder.

"It feels good to give back. Hopefully when we come back years from now we'll see some of the mangroves that we planted have grown big," said EMC Steve Young.

This is not the first time that personnel from the US Navy have helped out with activities at the Sanctuary. They have previously helped in cutting and weeding the insidious Typha reed and helping in digging wader scrapes for birds, among other activities.

Commander Michel Baker (US defense attache), Capt. Jon Kreitz USN (Commanding Officer, USS New York), Lt. Paul Dumas USN (Officer-in-Charge, Assault Craft Unit 4, Detachment B) and Capt. Patrick Madden USMC (Platoon Commander, Maritime Raid Force, 24 MEU) helped the rescuers to fragment corals and dived with the rescuers to attach them to a net nursery. Using toothbrushes, they also helped with the job of cleaning algae off the ropes of the underwater nurseries. They also had an opportunity to visit Cousin Island and go on a guided tour of the attractions there.