Local people are passionate and willing to contribute to the conservation and management of marine protected areas (MPAs) in their locality. This was revealed at an interactive meeting with residents of Port Glaud held on 30 March at Cap Ternay, the first of a series aimed at building community awareness and involvement in the conservation and management of the Port Launay and Baie Ternay marine national parks.

It will be recalled that in December 2020 through the Locally Empowered Area Protection (LEAP) project being implemented by Nature Seychelles, a pioneering Memorandum of Understanding was signed between the Seychelles National Parks Authority (SNPA), the designated authority for the parks, and Nature Seychelles to officially kick-off, for the first time, local involvement in these parks through a co-management process.

Isabelle Ravinia and Dainise Quatre, gave an overview of the two sites and explained SNPA's mandate. The Port Launay MP has one of the most popular beaches on Mahe, a beautiful mangrove at Anse Souillac, and rich coral reefs. The Baie Ternay MP contains abundant marine life and a combination of coastal habitats idyllic for swimming, snorkelling, and diving. Both parks are used by a wide range of hospitality operators. SNPA carries out monitoring of park activities, collection of park fees, mooring and demarcation buoy installation, education and awareness, and research. Challenges faced in the two parks include poaching, pollution, and damage by visitors.

Discussions revolved around the general use of the parks and the need for stricter enforcement of regulations. Residents observed that the Port Launay beach and park is more developed and frequented by visitors, therefore many more issues arise there, such as littering and high-speed boating. To remedy this, SNPA aims to improve its presence at Port Launay by building a base for their rangers. 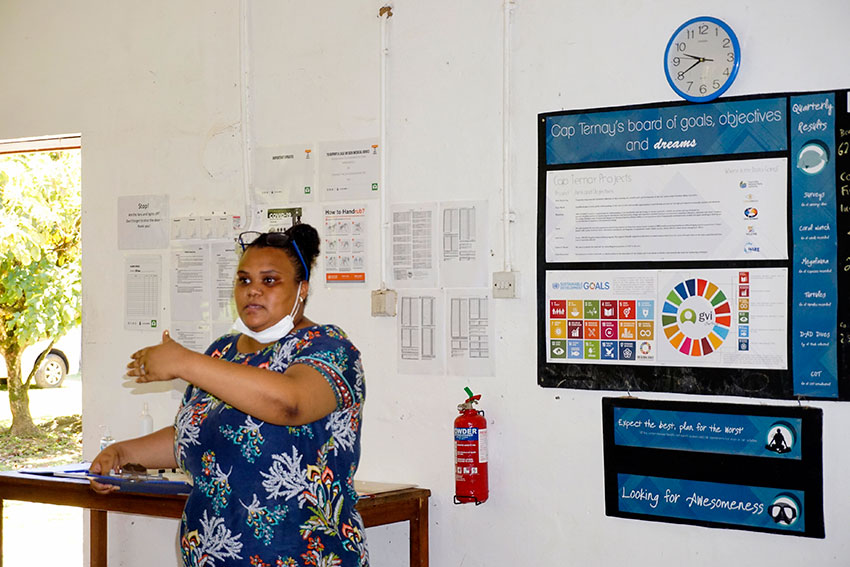 Residents made candid observations and suggestions

“Let us bring the community on board to help to educate marine park users,” a participant suggested, as a response to the problem of a small workforce for such a large MPA. Currently, the SNPA has two rangers and one boat to patrol and enforce the two parks, which are separated by the Cap Matoopa headland. The LEAP project, which is financially supported by the German Climate Change Initiative (IKI) with technical assistance from IUCN, will boost the manpower by hiring two additional rangers and a conservation officer.

Other suggestions included the erection of eye-catching information boards and signage, and the increased sensitisation on marine park use.

"I was impressed with the turnout and the participants were very active," Ms. Ravinia said. "They made some valuable contributions towards management of the two marine parks."

"Facilitating dialogue between the local community and the marine national park managers is central to the co-management process," said Corinne Julie of Nature Seychelles. "The gaps identified by the community are reflected in the current management plan of SNPA, which the LEAP project will assist in implementing."

Katie Searle-Evans of GVI Seychelles presented findings from a participatory marine biodiversity assessment of the parks commissioned through the LEAP project, which included the perceptions of local residents on the biodiversity. It also included a climate vulnerability assessment of habitats and identification of endangered and endemic species. The survey revealed a lack of awareness of the species present as well as threats to the environment. Most people were found to be loosely aware of the regulations in place. Conservation proposals included a coral restoration project, target species monitoring, litter management, and the expansion of the mangroves found in Port Launay and Anse Souillac.