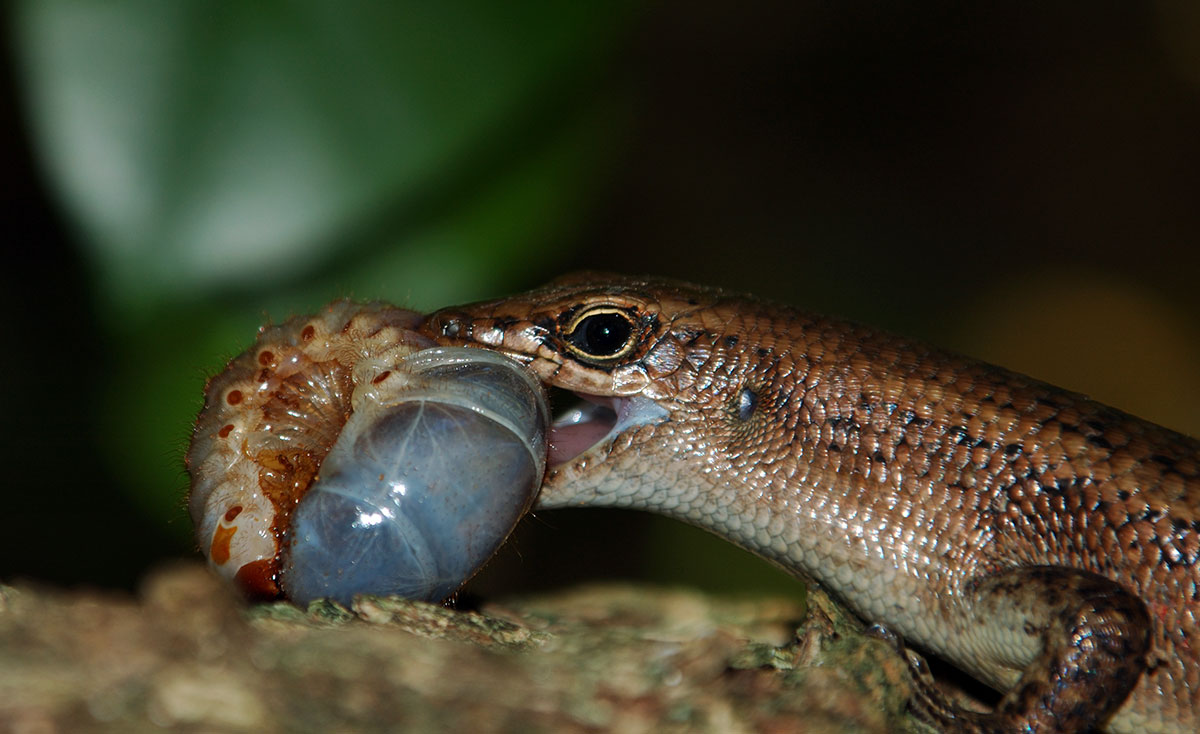 Many of us in Seychelles, it is safe to say, are familiar with at least one member of our local lizard population. Quite a number take residence in our homes. The house geckos – pale, nocturnal lizards – gather around lights to feed on moths and other insects.  Although some people are put off by their translucent body, others are so fond of their house geckos they name them.

Cousin Island residents became attached to another type of gecko; an inhabitant of the research house that had an addiction to Ketchup. They found the endemic bronze eyed gecko they named “Kevin” enjoys a dribble of their extra spicy chili sauce, displaying an affinity for condiments quite unnatural to his insect-eating instincts.

We are also familiar with skinks, the elongate, active lizards found mostly in vegetation. Going by the reactions we get at our offices in Roche Caiman and on Cousin Island, it seems that some people are completely repelled by these lizards.

So what are some of the Lizards found in Seychelles?

Of the Skink family, the Wright’s skink (Trachylepis wrightii ), a Seychelles endemic, can be distinguished from the Seychelles skink (Trachylepis seychellensis) another endemic, by its bulk. It is also mostly restricted to islands with large seabird colonies such as Cousin. Here they occur at high densities on the forest floors, and feed off dropped fish and squid, seabird eggs and chicks, other skinks, insects and fruits. The smaller, slimmer Seychelles skink occurs on almost all islands in woodlands, gardens and houses, and can be identified by its distinct black stripe along its side and its efficiency at climbing.

The burrowing skink (Pamelaescinus gardineri) is also an endemic found on the granitics and other smaller islands. Small, with rather reduced limbs, it is rarely seen as it burrows in leaf litter and soil. The Bouton’s skink which is native to Seychelles, is small and slim and is found on raised coralline islands and the Farquhar group.

In the gecko family, the bronze-eyed geckos are endemic to the granitic Seychelles. They have warty skin patterned in pale yellow-brown, dark brown and grey, with markings that are darker. The different species can be distinguished by size and distribution.

The green or day gecko are hard to miss because of their bright colour and because, unusual for other geckos, they are active during the day. There are four species present in Seychelles; three endemic and one native.

There is also the Pacific house gecko, Asian house gecko, which are introduced, and Sucker tailed gecko. The last is a small endemic gecko with heart-shaped pads at the tips of its toes and an adhesive sucker at the end of its tail. It’s found in natural woodlands and sometimes in houses, and although relatively widespread in the granitic islands, it is rarely seen as it’s small, cryptic and nocturnal.