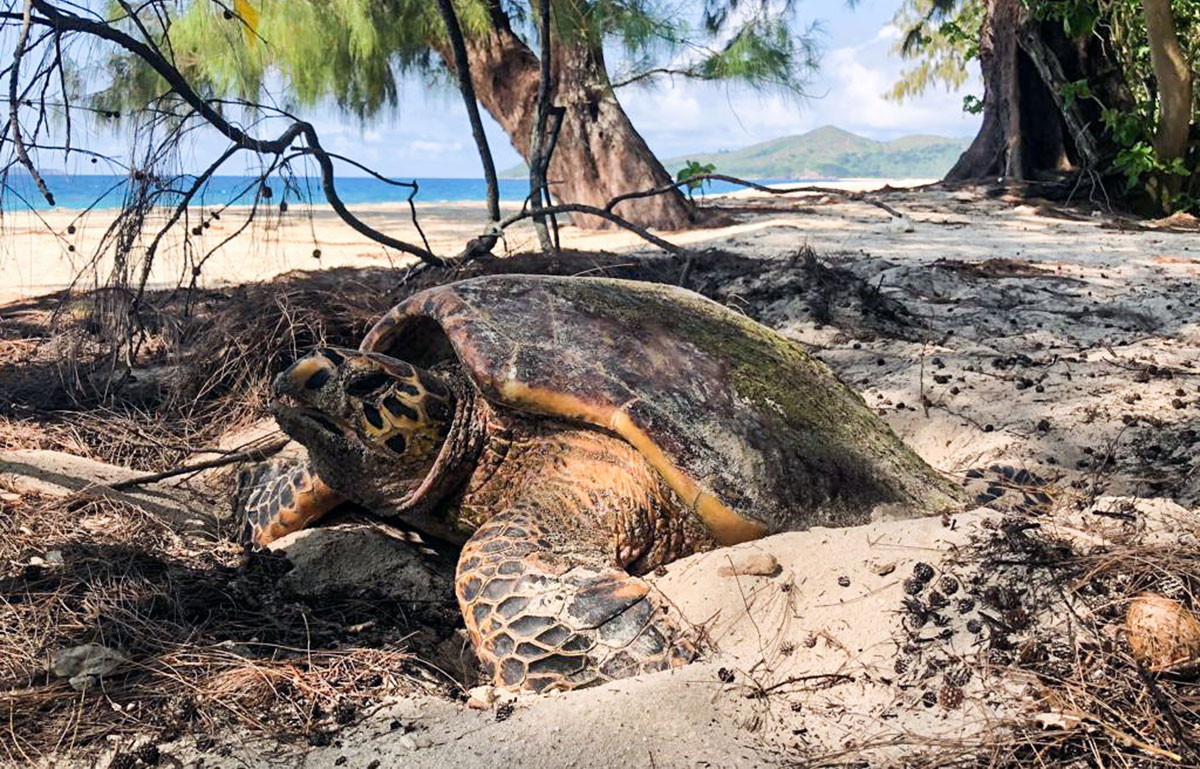 As we know you cannot put a schedule, time table or calendar on wildlife, and this species is a great example of that. The nesting season has begun at different times of the SE monsoon season every year. We cannot predict the schedule as the turtles run off of instinctive behavior. The emergence rate and nesting numbers have varied greatly over the past 10 seasons and this season hawksbills have emerged later than ever recorded. But waiting that extra bit of time was worth it. The life cycle of this Critically Endangered species has started all over again; we had our first emergence at high tide. 160 eggs and the perfect nest camouflage later, we now have our first clutch of eggs incubating, marking the start of a very busy season.

This season there has been a higher number of untagged hawksbill females, which could relate to the difference breeding season as well as overall emergence behaviour. Sea turtle breeding season can be vibrational, it will go through the ‘waves’ of groups of females, as they reach the age of sexual maturity and return to their natal beaches to nest. This kind of synchronized behaviour seen could also be due to specific environmental parameters from hatchling years, foraging years or migrating years.


“Oceanic currents are an important physical feature of some habitats used by sea turtles. Sea turtles often associate with currents during long-distance movements and as a primary foraging area which in turn can influence the distribution of nests along natal beaches.” (Bovery and Wyneken, 2015).

We have many questions regarding the late emeregence, but the biggest question remains, is this due to climate change? This is the daunting, ever so inevitable cloud that is constantly over our heads in conservation and science. We see sea levels rising, water temperatures increasing, currents changing, and pressures fluctuating as a result of of heightened human impact and continuous greenhouse gas emissions. Human emissions and activities have caused around 100% of the warming observed since 1950, according to the Intergovernmental Panel on Climate Change’s (IPCC) fifth assessment report.

This year we have seen the same number of nests laid in October, the first month of turtle season, as last year during, but last year the number of emergences was more than double. What does this mean? Long term data sets compiled will aid in the understanding the mystery of these ancient creatures.

Cousin Island is one of the most important nesting sites for this species in the WIO and it has a long-running turtle monitoring program, which was put in place in the 70s. It is one of the longest running in the world and aids in understanding population trends. In general, conservation of Hawskbill in Seychelles is more robust than in other countries in the region. Worldwide, the species is declining.